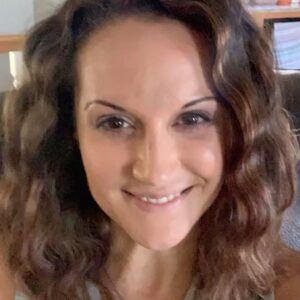 My spiritual awakening changed my life. I had always felt that I had a connection with something greater than myself, and having a somewhat religious background, it wasn’t surprising. But something felt different. It wasn’t until two years ago that I realized I was an Empath. I could feel others emotions and energy and would take them on as my own. This led to me feeling very confused and unsure of who I was and how I felt. I began to question what my life’s purpose was.

As an 8th grade Reading and Language Arts teacher, I read a lot of Young Adult books. I was reading a series in which the heroine was the only survivor in a car accident that claimed the lives of her mother, father, and sister. She came to realize that she had lived many past lives and learned that her chakras, or energy centers in the body, were her life force. This got me wondering what chakras were so I found a book called, Chakra Healing: A Beginner’s Guide to Self-Healing Techniques that Balance the Chakras by Magarita Alcantara. I began to learn more about self healing and how to infuse crystals into my daily life. Shortly after that, repetition of numbers became a big part of my journey.

About a year ago last March, I reached out to psychic/medium, Kelli Miller, from Omaha, Nebraska. Through conversations and her YouTube videos, she answered a lot of questions in regards to repetition of numbers, especially 11:11. Once I realized that repetition numbers actually meant something other than “making a wish,” I realized I was beginning my spiritual awakening. Once I accepted this into my life, I began receiving messages from Spirit.

I began to notice that Spirit would try to communicate with the people I was surrounded by. The messages were things I could in no way know. One time we were on a vacation and the people staying in the house next to us came over to visit. We had never met before. I felt a connection with one individual in that group and explained to him that I could communicate with those who have passed. With his permission, I began to do a reading. I was able to see and feel how this particular person had passed. This individual was able to validate that he had a male relative that was killed in a car accident, exactly how I was able to relay to him. Once that door opened, many others started to come forward wanting to speak to other members of the family. From that point on, Spirit would visit me when I was around someone with whom they wanted to communicate with. It was then I realized I was a psychic/medium.

Fall of 2020 I really started to pay attention to how I physically felt when I would do readings. My palms would itch and my right ear would get really hot. I also felt heat on the bottom of my feet. After doing some research, I discovered Reiki. I reached out to a local Reiki practitioner, Becky Jo Overton, and she pointed me to PrismsScape and Gina and George Crosheck. I received my Usui/Holy Fire III I and II in October of 2020 and my Reiki Master Teacher certification in Usui/Holy Fire III in June of 2021, both through PrismsScape with Gina. Gina’s guidance opened the door to a whole new world for me and my gifts and I am beyond thrilled to be able to be part of the healing of others in need.